Everyone is eagerly anticipating the opening of Star Wars: Galaxy’s Edge at Walt Disney World later this year. No one does immersive experiences better than Disney, and I personally cannot wait to step foot into one of my favorite stories of all times. And the details are slow to be released. So, here’s a recap of everything we know right now (updated January 7, 2019):

Star Wars: Galaxy’s Edge is a 14-acre expansion at both Disneyland Park and Walt Disney World’s Hollywood Studios Park. The two versions are supposed to be quite similar, with the exception of the “Star Wars Hotel.”

According to Disney, “. . .the largest settlement on the planet Batuu, Black Spire Outpost is an infamous stop for traders, adventurers, and smugglers traveling around the Outer Rim and Wild Space. Off the beaten path, this outpost has become a haven for the galaxy’s most colorful — and notorious — characters. Widely known for the petrified remains of its once towering ancient trees, the spires now stand guard across the river valleys and plains and have long captured the imagination of travelers to this planet. To the first settlers, these petrified spires became more than just landmarks; they became the heart of the outpost itself.” 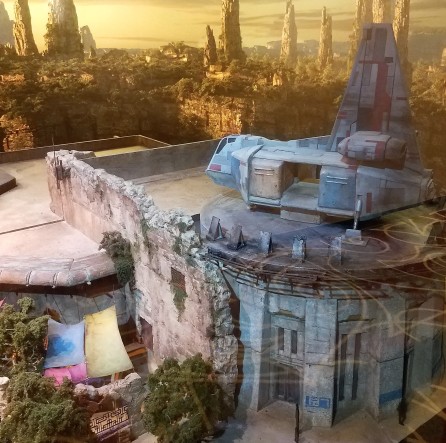 The most exciting highlights of this new land, located at the Black Spire Outpost, on the planet Batuu, will be two new rides:

-Millenium Falcon: Smugglers Run will give you the chance to sit inside the cockpit of the Millennium Falcon, and actually pilot the iconic ship. This is going to be the more intense of the two rides, and it will be responsive to guests. The buttons you push will actually determine what happens to the ship while you are in it. Check out this trailer video:

-Star Wars: Rise of the Resistance will be a ride-through attraction that will put you in the middle of a battle between the First Order and the Resistance. While this ride has been under construction, two giant AT-AT walker skeletons were spotted inside the building that houses this ride. I have also heard of an army of audioanimatronic Storm Troopers. Check out this trailer, which was actually shot inside the ride:

The land itself is expected to be extremely immersive, with new sights, sounds, smells and tastes, new and familiar characters, and new integrated experiences with the Play Disney Parks app. You will be able to shop a street market at Black Spire Outpost, and check out the food stalls for delicacies like blue milk.

Or pop into Oga’s Cantina! No self-respecting remote outpost on the edge of the galaxy would call itself a smuggler’s planet without a cantina, and Black Spire Outpost is no exception. With pilots, bounty hunters, smugglers, locals and galactic travelers passing through its doors, the Cantina is the perfect place to relax, sip exotic concoctions for both children and adults, and perhaps even conduct a little shady business. You never know who you will run into. Musical entertainment will provided courtesy of RX-24, the former StarSpeeder 3000 pilot droid we first met in Star Tours.

And speaking of sounds, is there anything more iconic than the music from Star Wars? If you agree, then this will be music to your ears: John Williams is creating the music for Star Wars: Galaxy’s Edge. Recorded by the London Symphony Orchestra at Abbey Road Studios, you can look forward to both favorite and new musical scores. Check out this video- you can spot the AT-AT walkers!:

How about that hotel? We don’t have an official name for this resort hotel yet, but we do have several fascinating details. This hotel will ONLY be coming to Walt Disney World, and will not be opening when Galaxy’s Edge opens, but some time in the future. Guests will board a launch pod, and be transported to a luxury starship in a galaxy far, far away, for a multi-day, seamless, completely immersive experience. This is no ordinary hotel. This is completely themed, with views of space from every window. You will be given the option to don Star Wars-inspired dress to help you blend in during your stay, and interact more naturally with the creatures you will encounter. You will even be given a mission, which will require you to complete tasks at Black Spire Outpost. Your stay will include high-end dining and all the excitement you would expect from an authentic Star Wars experience.

SO WHEN CAN YOU EXPERIENCE ALL THIS FOR YOURSELF? We don’t have opening dates yet. Bob Iger said in a recent interview that June is the opening month for Disneyland’s Galaxy’s Edge, and Fall is all we know so far for Walt Disney World’s Galaxy’s Edge. Of course, these are subject to change as Disney continues to put the finishing touches on these spectacular new additions.

So what’s a Star Wars fan to do? Well, you can safely book your Disneyland vacation for this fall, winter, or in 2020. For Walt Disney World, you could book for December 2019, or in 2020 to be sure everything is open by the time you arrive.

Ready to book your first visit to Galaxy’s Edge? Simply fill out the contact form below, and I will be in touch shortly!

Or, you can sign up for my Star Wars: Galaxy’s Edge email list. I will send out information as soon as I get it from Disney, so you can stay up-to-date on all the latest news from Batuu. Click here to be added to the list.

Epcot International Festival of the HolidaysDecember 30, 2022
29 days to go.